Another Madrona has been completed.  Sadly, it is the last one.  Happily, a new event will take it’s place.  Same bat time, same bat channel.  Different name, and different people running it.

This year I took a dye class, tablet weaving, spinning, and knitted lace.  All three of my teachers are superstars in their field, so I left Madrona on a high note.  The dye class I ended up in wasn’t a practicum class.  I gave that one up for the greater good.  So, I don’t have any pictures from dyeing.  However, my tablet weaving was a huge success!!! I love my space invaders…and their creepy eyes.

My favorite John story from that day was one of the ladies had warped her loom funky.  I didn’t see/hear exactly what she did. But, that meant her piece wasn’t doing what she wanted it to do.  John went over to her, and figured out it was the warp, and not her weaving.  He said something to the effect of he didn’t want her to feel bad about her weaving, she was doing great.  She did need to feel bad about her warping, though.  Keep in mind, she comes to many of his classes, and he develops wonderful rapport with all of his students.  So, in the moment, we all laughed (she included).  The warp was fixed, and she carried on.  Auntie Pam bought me a loom, and John signed it for me. 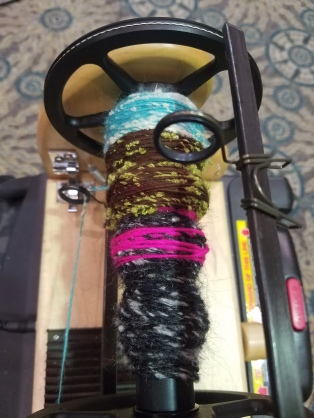 Spinning with Judith is  always a joy.  She had me putting random things in with my fiber, which is how I ended up with this lichen yarn.  She’s just so matter of fact about spinning, I love her so much.  There’s never anything that we shouldn’t try.  She tells us what the potential pitfalls may be, but never says “don’t do that”.  Granted, it’s spinning, not anything that’s going to blow up.  The worst thing that will happen is the yarn will fall apart.  Oh well.  I did see these totally awesome spinning wheels that are in little pseudo briefcases…The Device. Seriously, that’s what it’s called.  I really need one.  Poopie’s eyes just got really big when I showed him what they look like.  I’m working on justifying it.  I just can’t quite yet.

And, finally, Franklin’s class.  He had me too busy to take pictures.  Auntie Pam took bunches.  And, honestly, his classes are technique, so we were futzing on swatches.  Not very photogenic.  But the information from Franklin!  The most important take away from his class was after a few inches, put the work down and conduct a “frank assessment” of the work to make sure it is what you want.  If it’s not, take it out, and fix it.  Friend L apparently had the same grandmother give her this advice, based on the number of times she restarts things.  It is often hard for me to just pull out a bunch of work.  I will do a lot of contortions to make something work that really shouldn’t.

The trip home was much less eventful than the trip up was…which was good.  Remember how I said on Thursday that some times, I’m all about the destination? That was yesterday.  Madrona always takes it out of me.  I was tired, and just wanted to be home.  Thankfully, the gods that oversee Madrona allowed for that to happen.  Please enjoy this tablet woven police box.  It is, unfortunately, not how I got home. 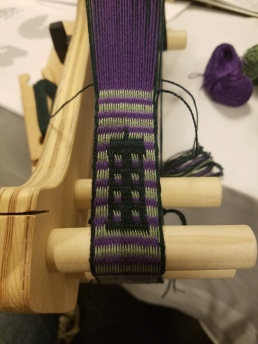 While I really enjoy my time at Madrona, and all the stimulation and all the wonderful people, I am always so eager to come home.  Which is awesome–to have a home I’m grateful to come home to.

I’ve missed writing, and I’m working on trying to get scheduling worked out to where I can more consistently write.  For now, though, I’m signing off.

View all posts by Ciudadana