Not only is this the second time this post has been written, but it was supposed to have gone up for Wednesday.  The original post disappeared.  I have no idea where it went.  And then I redid the post to put up yesterday, but that didn’t happen either.  So…of course, this must be Thursday…

I’m mostly caught up from the lost month.  The laundry is caught up, and I have no more toes that require stitching up.  (shhhhh, yes, I know there are many other things that went by the wayside, but let me enjoy my sense of accomplishment) 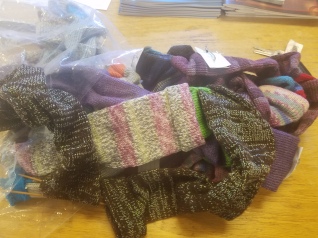 As you can see, most of my Wednesdays were quite filled with the lovely kitchener stitch.  I know many people who cannot stand the kitchener stitch.  I have no idea why.  Just like anything else, it’s a bit complicated and/or fussy when you first start.  But truly, it is a wonderful thing.  The kitchener stitch can be used to join two pieces of knitted fabric seamlessly.  Honestly, once it’s done and gone through a wash, you can’t tell it’s even there.  When I was initially taught the stitch, I was warned to not do anything else.  Have no distractions!  My knitting ladies can tell you, I can now do many, many things at the same time as stitching up toes.  I now have a rhythm.

My teacher was correct.  Initially, I had to focus quite a bit to make the stitches, and I had to go back and re-tension those same stitches.  Any distraction was difficult to come back from.

I believe there is benefit in letting someone know a thing is going to be difficult.  It validates how much trouble they have.  They don’t have to feel defeated because the difficult thing is well….difficult.  Just as important, though, is to not discourage a person.  Just because a thing is difficult does not make it impossible. It’s a tough line, but it’s an important line to tread.  Minimizing a task’s difficulty can be pretty discouraging when it turns out to be difficult to accomplish.  Minimizing the difficulty also minimizes the boost of confidence one can get having accomplished a task.

Try not to be discouraged by the hard things.  They are worth doing.  And, having done them enough, they start to become a little less hard.  While they may never be something you enjoy, they may become something you no longer dread.

For me now, the kitchener stitch is something I can do with ease. I don’t dread it, and I don’t just suffer through it.  Instead, it’s just another part of making a sock.  What my teacher said is no longer true for me.  She wasn’t wrong when she said it, but that reality has changed for me.  I changed that reality.  Which is pretty powerful when you think about it.

One thought on “I have the power!”