This blog thing is hilarious to me.  I usually have an idea of what I want my next blog post to be about.  Often times, it involves me texting/calling folks and asking them for pictures of stuff I’ve given away to show you.  But, my non-existent ADD comes out to play, and something else invariably pops up right before posting, so I end up with a bunch of 1/2 done blog posts, which I’m sure I’ll get out later.  This does NOT AT ALL reflect my normal creative process.  Pay no mind to Poopie’s frantic gesticulating.  He has no idea what he’s talking about.

In my defense, I have finished some of the previous blogs.  For example, Recuerdos was hanging out for a month or so, until the PERFECT opportunity to update and post arrived.  This also happens in my normal, day to day life.  I just have way more space to spread out IRL vs. on the inet.  So, the newest shiny subject is gardening.  I have a half done post about something else I was going to do tonight, but this weekend was faboo for the gardening aspect.

I chopped up my fruit trees. 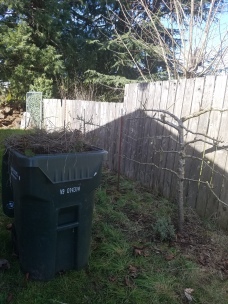 I have no idea what I’m doing.  That’s a bit of a stretch…I have SOME idea.  I’ve taken a couple classes from the Master Gardeners.  But, ideally, someone would come to my house.  Blindfolded, of course…I don’t want anyone knowing where I live.  They would tell me: cut here, because this.  And: cut there, because that. It’s hard for me to do spring cutting.  I feel bad about curbing growth.  Logically, I know I’m directing growth, rather than curbing..but still.  Last year, I didn’t trim back far enough based on conversations I’ve had with others who espalier their trees as well.  Fun fact, that is not the same thing as espadrille.  This year, we’ll see if I have let the pendulum swing too far the other direction.

Roses, I’m good with.  Contrary to popular belief, they are hardy suckers.  My mom showed me how to chop them up but good.  They keep coming back just as strong as ever.  As does the hydrangea.  Poopie doesn’t seem as concerned with the roses when I chop them up, but the hydrangea usually makes him worry I’ve gotten too exuberant.

This year, I won’t be able to participate in either of the seed exchanges I know about in my area.  Seed exchanges are soooo cool.  You show up, maybe with seeds, maybe empty handed, and you go home with seeds that you can turn into plants.  Or…sometimes, you get bulbs, or starts for different plants.  This year, even if I were able to have attended one or the other, I wouldn’t be able to really do seeds, as I’m going to be gone for almost two weeks in the middle of seedling time.  Which is fine, I end up starting way too many plants, and overwhelming myself.  I’ll just buy seedlings this year. Meanwhile, I’ll send a bunch of seeds (see featured image) to one of the exchanges.

But, I still need to get my plots ready. 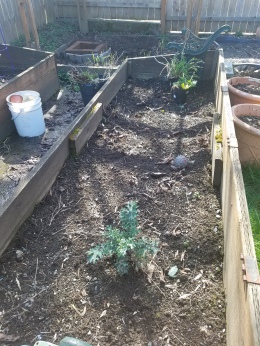 I came out early enough that the weeds aren’t too crazy.  Plus, I got to see my volunteer kale.  I do a pretty poor job of fall cleaning.  I can tell you it’s because I am letting the nutrients go back into the soil.  And that may be true, but I justify it by seeing my volunteers the next spring.  If I had done a better job of clean up, the kale and the chard would be gone.

Let me tell you my favorite volunteer story.  I periodically try to grow potatoes.  My success is…questionable at best.  So one year, I *DID* do a good job of fall clean up.  I pulled the last of the potatoes out of the bin, and put the tops in my home composter. My outside composter only gets garden stuff. No weeds.  It doesn’t get hot enough to kill seeds.  The next spring, I’m be-bopping around the yard, just puttering, and notice what looks like potato leaves coming out.  I don’t think much about that. 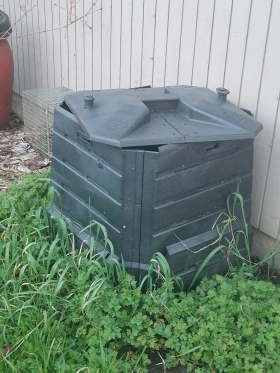 In the warmth, and the nutrient rich environment, some clippings get what appears to be a surge of growth, but nothing happens with them.  Fast forward to the end of the season.  I open up the bottom section to pull out the composted stuff, and out spills a bunch of potatoes.  So…I go to the kitchen, get a bowl, and gather them up.  I decide to try out a new potato recipe with those potatoes.

Apparently, Thing 2 had been watching.  When I served the dish, I told Poopie how it was made, and Thing 2 asks “are those the potatoes from the garbage?”.  (She was such a pleasant teen)  Yes.  Yes they are.  To this day, that dish is called “garbage potatoes”.

This goes to show you that the difference between serendipity and adversity is often a matter of perspective.  Her garbage was my treasure.  My father in law grows blackberries….on purpose. I am forever cutting back blackberries. 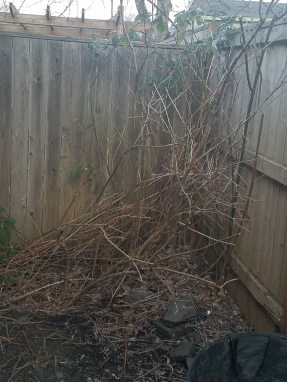 Last year, this whole area was blackberries.  The poor lilac has been overrun. Even weeds express this dichotemy…Did you know that dandelion roots can make a dye for yarn? The leaves make a different color; and the flowers, still another.  Poopie spent a lot of time pulling out scotch broom as a weed (it IS in invasive species).  But a couple of years ago, I made him bring me home a bunch to dye yarn with.  I gave that yarn to L.  She’s on vacation, so I’m not going to make her send me a picture of it for you.