I tell people that Poopie and I are ineptly supportive of each other. This is because we do support each other. We are just terrible at it.

In the early part of our relationship, I had said that I thought I wanted to learn how to spin yarn. I mean, I already knew how to knit and crochet, so the next logical step was to learn to spin, right?  However, in looking for a wheel, I discovered that there is very little depreciation in the cost of a spinning wheel.  This meant spinning wasn’t going to be a low cost experiment.  Knitting and crocheting can be done on the cheap, and someday I’ll tell you about my introduction to weaving, but spinning…  I couldn’t justify that big of a purchase if I didn’t *know* I was going to pursue it.  So, I decided that was that. It would need to wait until I got rich.

Except for Christmas. My Poopie had found a spinning wheel in an antique shop, and purchased it for me!  (no, there are no pictures, Dear Reader…what is your deal with pictures??) I was so excited!  I would learn to spin!  And I diligently tried.  I really, really did.  I even found out about a poly drive band, and made Poopie help me figure that out.  Nothing.

However, I am lucky enough to live close to the Aurora Colony Spinners. And they have classes.  See, I had been trying on my own, and failing.  I don’t know if YouTube existed, if it was in it’s infancy, or if I just never thought of it, but regardless, I didn’t play on the YouTubes.  I decided, instead, to take a class on spinning.  The Aurora Colony even let me rent a spinning wheel.  With the patient help of Barbara Quinn, I was able to learn to spin (and ply) in just one day.  Seriously.  Just one day. All that time on my own, and one little class fixed it.  Le Sigh.

So, I called Poopie and ask him to please bring my wheel. He did.  I am informed this is called a chair wheel.  It’s a re-creation of a wheel that was made using the bottom of a chair as the frame.  I told everyone the story of Poopie buying me the wheel, and how supportive he is.  Appropriate oohs and aaahs.  I sat down to try out my new-found prowess…and nothing. One by one, several ladies tried.  No one could get the blasted thing to work.

So, I found out that it wasn’t me!!! It was my equipment. 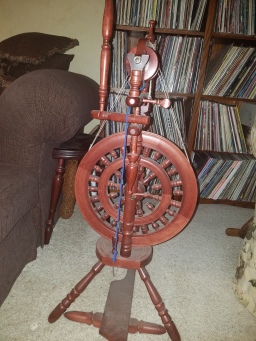 Armed with this new knowledge, I went out (eventually) and bought myself a wheel.  Or 2. Or 3. Then I sold #2. Then bought #4. And later, #5.  Trust me, Poopie tells me about my wheel collection (which is only 4).  I ask about his guitars, and he finds somewhere else to be, and his hearing has suddenly deteriorated. I would also like to point out his wall of lp’s behind spinning wheel #1.

I, too, am inept at being supportive.  A couple of years later, I found a reel to reel for Poopie.  He had been wanting to start recording his music.  Being a Luddite, he was wanting analog.  So, I was in our local record store and noticed a reel to reel for sale.  Huzzah!  I bought it for him.  If you are a crafter, Dear Reader, you know that equipment has lots of variables that mean nothing to the lay person, but can make or break your project.

Apparently, the same is true with music.  It would be very helpful, however, if Poopie didn’t sound like a trombone when he talks about his music equipment.  I’m not one of the Peanuts kids, I don’t understand “Wa waa wa waa wawa waa”.  So, even had the reel to reel I bought him actually worked, it was a 2 track instead of a 4 track.  Our local record store took back the defunct reel to reel.  Two machines later, he now has the one he wanted. Also, please note the 2 guitars and mandolin, in addition to the guitars and basses in the music room.

This post started out to be a post about equipment.  I was going to end that the lesson I learned from this is that if something doesn’t work, don’t necessarily assume it’s you.

But then, yesterday, Poopie sent me a picture of this real, true to life CD (featured image).  That’s me being thanked on a CD.  Do you know what I did to deserve that? Me neither.  Except…I showed up.  I sat in the audience at most of their shows, and crafted.  When there were side projects, they knew they’d have at least one friendly face in the audience. Even my party foul story is about us showing up.  While Poopie and I were bumbling around like idiots, our friend was texting to make sure we were going to be there.  He was going to go up in front of a room full of strangers, and wanted just a couple familiar faces.  Never underestimate the value of showing up.

Poopie and I gave each other objectively terrible gifts that we had to return.  But, the true gift is that we showed up for each other.  So, take your crafting and show up somewhere and support someone or something you love.