The last day of Madrona is like the last hour of a night out partying. Everyone is exhausted, but no one is quite done. We know it’s time to go home, and we are ready to go home, but… there is still so much party left to be had.

As I said Saturday, Sunday’s class was John Mullarkey. I saved the best for last! But honestly, how do you pick a favorite class? I really can’t. I joke about my mad crush on John, but really, all the classes were excellent, as expected.

John and Franklin are BFF’s, so I got a bonus Franklin visit when he came in to draw a sheep for John! John has many other talents.

Remember the story of how Pam and I met? Well, the other lady from that story was in this class. This time, we were on opposite sides of the room, and Pam didn’t attend. Did that stop the shenanigans? Don’t be silly, Dear Reader, of course it didn’t!

John was gracious as always. Especially when I compared his drawing of a sheep to Franklin’s drawing. I think he only threatened to kick me out of class a couple of times throughout the day. For a Sunday class, that’s pretty good for me.

You may think with John’s drawing skills, I should look elsewhere for a design class.  You may be wrong.  Like I said, he has other talents.  One of which is teaching.  His medium for art is in fiber and weaving, not in pen and ink.  He made the belt he was wearing, which he called “Robot Factory”.  Which looked like little R2D2’s, but, are NOT.  I really wanted the pattern, but it involved hexagonal cards, and I am not there yet. I couldn’t take a picture without being extra creepy. I think this showed remarkable restraint on my part. 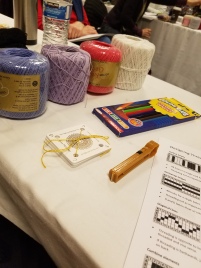 Here’s what I started off with to begin my design journey.  I generally try to bring colors I wouldn’t normally use, or wouldn’t normally pair together, for classes.  My thought is that I’m experimenting anyway, so I might as well go whole hog in my playtime.  Those colors are very “Easter” to me, and not ones people would generally associate with me.  So I played.

The featured photo is the band I came up with.  I originally wanted to do a lollipop, but clearly did not grock the whole “S” and “Z” threading properly.  So it ended up being a Truffula Tree.  However, as people were coming along, some thought with different colors, it could be a poppy, and I tend to agree.  That’s the fun of design class, you just play and play.  With most of my samples from classes, I’m able to find things to do with them later. I’m sure the same will hold true for the Truffula Trees.

As I said, the class was great, and I was pleased that John remembered me from last year.  We will just conveniently forget it was probably because I am such a pill to have in class…or that I may have been creepily following him around last year (Hey, I didn’t take a picture of his belt!).  Hopefully, he’ll come to Oregon again next year, since I missed him last time he was in Eugene a couple of years ago. 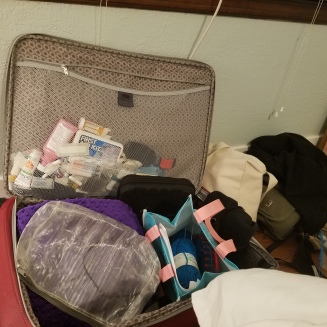 As you can see, we have different styles of packing.  However, I’d like to point out that I knew where my brush was Sunday morning.

Today has been a day of recovery for me.  This wasn’t just a night out, after all. It was a VERY LONG weekend out.  My brain is still mostly mush, but I can possibly be of some value tomorrow in my day job, and that’s all they can ask of me, right?

Madrona was clearly a success for me.  It’s so much fun to try new things, and see how other’s approach the same things.  Isn’t it wonderful we aren’t all the same?