I craft in public. Lately, it’s been knitting…so this story is another knitting story.  I promise I do other crafts, it’s just knitting is uber portable for me.

I DO NOT have patience.  I can’t stand waiting.  My time is valuable, dammit!!  However, since beginning crafting, and taking my crafting with me, I’ve been much more chill about having to wait in lines, or waiting rooms.  I just make sure I have something portable with me.  Take this hat, for example.

The life of the hat often begins on the yarn walls.  I’m going to re-use some photos from before to show you. 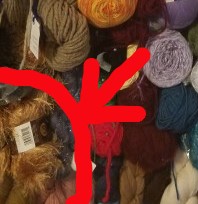 Here you see where it all begins…the Yarn Wall.  In the corner, is the Fun Fur.  If you look really closely at the photo of the Yarn Wall in the previous post, you will see the yarn in the very lower left hand corner.

The body of the hat actually was in the music room, but was hidden underneath a failed weaving project. See, underneath that cloth is the yarn I used. 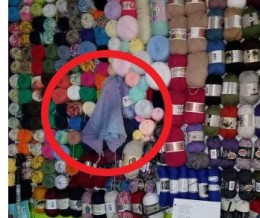 I know I can do hats pretty much anywhere, so I had decided to make a new hat be my new carry along project.  I wanted to try something different.  And I was inspired not only by my yarn wall, but also by talking about my yarn wall.  I wondered if maybe I could use the Fun Fur to make the hat look like it had a fur trim?? 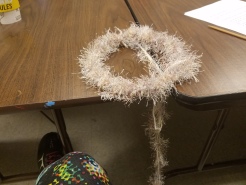 I tried a couple times to cast on.  Oh, yeah, this is why I don’t care for Fun Fur.  It’s not really all that fun to work with. So here I am at a board meeting.  I’m being unnecessarily snarky.  Strangers may think I craft because I’m not paying attention.  The opposite is true.  I actually am better able to focus when crafting.  I will discuss that in another post.  This is actually the second attempt at casting on.  I didn’t like the look and feel of the first time.

Here I am knitting in a bar.  Poopie and I were at a friend’s birthday party last weekend.  Those ladies in the background were not part of the group.  Hat knitting is wonderful for bars.  It is small, and I can knit the hat in the dark.  Thank all that is holy, because the stupid Fun Fur makes it impossible to see your stitches anyway.

And here it is the next night at a concert at local venue. I have, apparently, a reputation for knitting at concerts.  There will often be chairs set aside for me at house shows so I can sit in my corner and knit while listening to live music.

I actually took several more pictures over the week, but my phone ate them before I uploaded them to WordPress…so, my lesson for this post is…save your pictures right away.  This hat came with me to stand in line outside of the Old Church in Portland  for a general admission show on Tuesday.  It also came with me to a City Committee meeting on Thursday.  My knitting is also commented upon (I’ll assume positively) as I perform my civic duties.

OK, off my soapbox, and back to my hat.  The final trip the hat made with me was to the mountains for a snow weekend.

Here we see me close to getting it off my needles.  You will see that while on a snow weekend in a cabin, and playing a tabletop game, I am finding time for knitting.

Turns out, the hat ended up very much as I had hoped.  The Faux Fur look worked out, and it adds a stylish touch to an otherwise “boring” beanie.  I’m not at all certain it was worth it,  but I had the yarn, and was able to experiment.  I, personally, wouldn’t buy Fun Fur, even for this, but since I had it, I’m glad I found a use for it.

While I have mentioned lessons and have jumped on my soapbox, the true lesson of this hat and post is that you can find time for crafting.  I’ll be talking a lot about how crafting benefits me, and what I get out of it (besides the things I make).  But, this is how I do it.  Just one stitch at a time.  Wherever and whenever I can, I make just one stitch.  And then, the next time, I make another stitch.  Each stitch is so tiny, it seems inconsequential, but put them all together, and you have a nice, warm, hat.